Steam Blowing Through The Drip Pipes 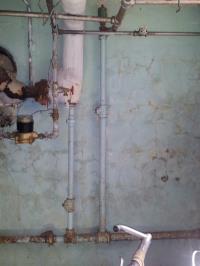 At the end of the steam mains on two pipe vapor systems, there are usually two vertical pipes that carry the condensate of their respective mains back down to the wet return pipe which takes the water back to the boiler.

When the original coal boilers were installed, the water lines were usually somewhere like 4 to 5 feet above the floor, and the wet return pipe running around the basement wall was well below water. The water seal of the drip pipes is needed to keep steam from passing from the steam drip pipe around the bottom and then up the return drip pipe and rear ending the air vent on the end of the return main. If that return vent closes, you generally loss heat to whatever that main serves.

Watch this video to see what happens when someone puts in a shorter modern boiler, but doesn't install a false water line or put the boiler up on blocks.