Description of the System

One Pipe Steam
One pipe steam systems are just that, steam systems that have just one pipe going to the radiators. The pipe serves double duty in that it conveys steam to the radiator, and also acts as the drain for the radiator to relieve itself of the water that forms as the steam condenses. The piping in the basement will consist of a large diameter ''main'' pipe, (and there may be more than one of these), that leads from the boiler to the system of radiators. This main can either pitch away from the boiler, or pitch towards the boiler. The pipes leading from the main to the radiators are usually called runouts but may also be called ''spring pieces''. The pipes that take off from the mains generally will pitch back toward the mains. Here is a link to a couple illustrations of one pipe steam systems that should help you visualize what takes place.  Sample One Pipe Steam Piping Detail 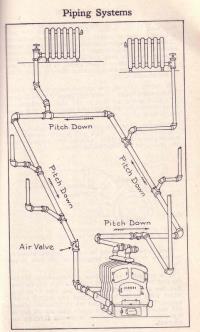 What are the advantages of one pipe steam? It was cheaper to install due to less pipe used. It is also the simplest of the steam systems.
What are the disadvantages of one pipe steam? The piping is larger for this type of steam system as the steam and the condensate must both share the same pipe but stay out of each others way. Larger pipes are harder to work with. Larger pipes also mean larger holes in the wood framing members. The larger the holes in the wood, the more a structure is weakened. The hand valves generally (99% of them), have to be either fully open or fully closed, since water hammer noise will be created by attempting to modulate the valve in some middle position. This makes it tougher to regulate the heat output from the radiator. The biggest disadvantage is the air vents noise. The faint sound of air escaping as the steam pushes it out. Then a click as the steam shuts off the vent. Then sometimes the ''sucking'' sound of air going back in to break the vacuum created by the collapsing steam as the boiler shuts off. The air vents have also been known to spit on the walls a bit. The wealthy people didn't like that and asked for something better, which gave rise to the two pipe system.
Fill Out a Form • OR • Call Us Today 440-252-7120
Fill Out a Form OR,
Call 440-252-7120
Click to view full map
Get In Touch
LICENSE: #22183
ADDRESS:  7601 First Place Suite A-2
Oakwood Village, OH 44146
PHONE:   440-252-7120
HOURS:  Monday to Saturday: 9AM - 5PM
LICENSE: #22183
7601 First Place Suite A-2
Oakwood Village, OH 44146
Monday to Saturday: 9AM - 5PM
Connect With Us