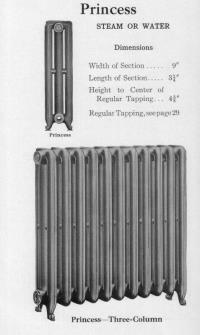 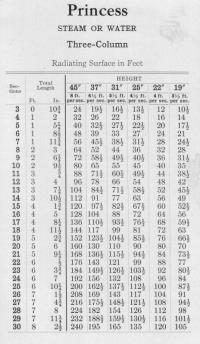 A radiation survey is a physical count and size up of the radiators in a building.  Here's how it works:  Many years ago someone calculated how much heat loss was in each room of a building.  The plumber then put in enough radiators to cover the heat loss on the coldest day of the year.  Then he put in a boiler big enough to fill all of that iron with steam.  He know how big the boiler had to be because he also knew how much square footage of iron he put in.
So now it's time to change the boiler out.  But we were not the guys who put the radiators in upstairs.  Those guys are dead.  So we have to physically go around and count the number of radiators, the number of tubes or columns on each section, the number sections in each radiator, and the height of each radiator.
We then take this information and use a chart like the ones pictured here to come up with the square footage of "radiator iron" present.  Then we can spec out the proper size boiler.
Doing a radiation survey is also a great way to find out if an existing boiler is big enough to handle a system modification like a room addition.  Even if it is, are the pipes big enough to handle the extra load?  A radiation survey can answer these questions.
Fill Out a Form • OR • Call Us Today 440-252-7120
Fill Out a Form OR,
Call 440-252-7120
Click to view full map
Get In Touch
LICENSE: #22183
ADDRESS:  7601 First Place Suite A-2
Oakwood Village, OH 44146
PHONE:   440-252-7120
HOURS:  Monday to Friday: 9AM - 5PM
Saturday: By Prior Appointment Only
LICENSE: #22183
7601 First Place Suite A-2
Oakwood Village, OH 44146
Monday to Saturday: 9AM - 5PM
Connect With Us