Description of the System 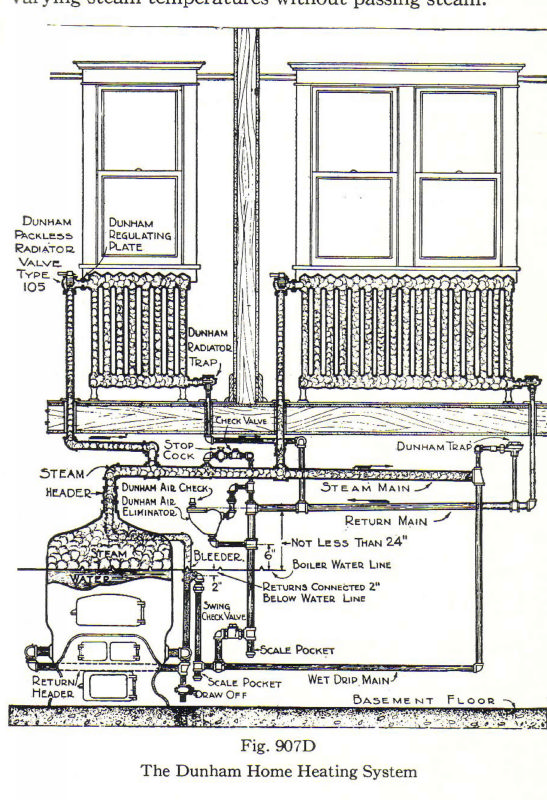 The two pipe steam system is called two pipe because each radiator has two pipes going to it. One pipe carrys the steam to the radiator. The second pipe carrys away the condensate from the radiator. The second set of pipes designed to carry the condensate are called ''return'' pipes. They return the condensed water back to the boiler so that it can be turned back into steam again. The cycle is like this, first the boilers steam heads down the main pipe toward the radiators, it goes up the runout pipes to the radiators, at the radiator is a valve, which may be closed, may be open, or may be any place in between. Once past the valve, the steam condenses in the radiator, turns into water, goes through a steam trap (usually) and into the return pipes. From these back to the boiler where it all starts over again.

One of the great advantages to the two pipe system is the ability to control the heat from the radiators by modulating the inlet valve at the radiator. There is no danger of creating water hammer noise by doing so, as would happen with the One Pipe Steam system. The noisy air vents of the One Pipe Steam system don't exist. The air venting is usually just down in the basement. But, all these advantages do have their price to pay. There is more maintenance involved on the Two Pipe Steam system. Another advantage of this system is the radiators are easier to balance.
Fill Out a Form • OR • Call Us Today 440-252-7120
Fill Out a Form OR,
Call 440-252-7120
Click to view full map
Get In Touch
LICENSE: #22183
ADDRESS:  7601 First Place Suite A-2
Oakwood Village, OH 44146
PHONE:   440-252-7120
HOURS:  Monday to Friday: 9AM - 5PM
Saturday: By Prior Appointment Only
LICENSE: #22183
7601 First Place Suite A-2
Oakwood Village, OH 44146
Monday to Saturday: 9AM - 5PM
Connect With Us