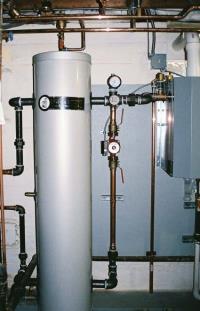 Buffer tanks are nothing more than tanks that hold water to provide some predetermined capacity to a hot water heating system. There are a couple (and probably more) reasons that someone would want to add a buffer tank to a heating system.

The primary reason one would use one is to give a boiler something to ‘chew’ on.

Think about this scenario. You have a boiler that is capable of putting 200,000 btu’s of heat into the water, but the only heating zone currently calling for heat is a small bathroom radiant floor with perhaps a need of a mere 3,000 btu.

That boiler is quickly going to reach temperature and shut off on high limit. Then as the temperature drops it will restart, then stop, then restart, then stop. That is what we call ‘short cycling’ in the trade. It will wear and tear the boiler components to death. After all, how many times can you flick a switch before the switch breaks? If your boiler is short cycling, your headed to fast and pricey repair shop heaven. So you combat this by having a tank of water that the boiler can chew on. The small zone now draws its water from this buffer tank. The boiler doesn’t care about the small zone anymore. All it cares about is heating the buffer tank.

So the primary reason is to give the boiler something to chew on and avoid short cycling.

Patterson Kelley company has an excellent article about this practice.

Another great reason for using a buffer tank is to provide hydraulic separation between the boiler and the system piping.  What this is  (without boring you) is a way to isolate the boiler side of the heating system from the house side of the heating system. Why would you do this? Lets say your house needs ‘X’ amount of gallons per minute and that requires a ‘’y’’ sized pump. But because of the boilers heat exchanger design, the boiler requires an ‘A’ sized pump, for ‘B’ amount of gallons per minute. The easiest way to do this is by making two different loops where the only point common to the two is the buffer tank. It effectively hydraulically ‘isolates’ each loop from each other.

Buffer tanks come in many varieties. They can be purchased ‘factory made’ or sight built using an electric water heater, and a water heater storage tank. Really any tank that holds extra water can be used. Boiler Buddy Co. has some good literature including a video on their web site.