Adding Extra Water to an Existing Steam Boiler
There are times when with the newer lower water content steam boilers that you realize you don't have enough water for the system to operate properly. You probably notice that the water feeder is engaging and adding water to the system and then when the boiler turns off, the water all comes back and floods the boiler. You may be tempted to just keep draining that water off, but thats just shortening the life of the boiler by bringing on new feed water that carries oxygen with it. Its this oxygen in the water that is eating away at the boiler.
There are several ways to add water to the boiler in a manner that the feeder is not the device in use.
The first way is to add a boiler feed tank. This is a very large tank, it has a pretty good sized pump, and of course there is a pump controller to be mounted on the boiler. This works but the problem is that these factory boiler feed tanks usually are not used when there is a wet return existing. So F&T traps are then installed to turn wet returns into dry returns. There is a way to use wet returns but the boilers pressure has to be able to be kept very low, like in vapor range. And a false water line must be added. This is alot of work and money and may not be the best option for adding water. 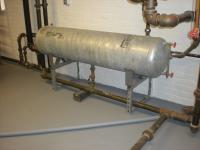 The easiest thing to do and the least expensive is to add a passive reservior tank to the system. I've seen these mounted in the 'A' dimension drip pipes, in the equalizer pipes, and even incorporated as part of the hartford loop. I've found them to work best when placed as close to the boiler as possible. The tank just holds extra water and is pressurized by the steam so that the pressure above the water in the steam boiler is the same as the pressure above the water in the tank. So as the water in the steam boiler goes into the system in the form of steam, more water comes into the boiler from the reservior tank by gravity. This usually will work, but on a recent job it just wouldn't work. The boiler was so strong it pushed its water into the tank instead of the other way around. Thats okay, because there is a way around that problem also.
The Morph Tank- What you would do is install the passive tank and if for some reason it dosn't work right for you, then you morph it into a cross between a passive tank and a feed tank. A pump gets added. Obviously a control to tell the pump to turn on. We used the already existing low water cut off that was on the boiler. You would too. The heart of the morph is the check valve and a normally OPEN zone valve that closes during a call for heat but opens when the boiler turns off in order to allow water to enter the reservior tank. Thereby setting the stage for the boiler and its tank to operate together on the next call for heat.
So the easiest way to add extra water to a boiler is to add a passive reservior tank with the understanding that it may have to be upgraded to a morph tank. Then the boiler that seems to have plently of fire, but not enough water will now have plenty of both.
Fill Out a Form • OR • Call Us Today 440-252-7120
Fill Out a Form OR,
Call 440-252-7120
Click to view full map
Get In Touch
LICENSE: #22183
ADDRESS:  7601 First Place Suite A-2
Oakwood Village, OH 44146
PHONE:   440-252-7120
HOURS:  Monday to Friday: 9AM - 5PM
Saturday: By Prior Appointment Only
LICENSE: #22183
7601 First Place Suite A-2
Oakwood Village, OH 44146
Monday to Saturday: 9AM - 5PM
Connect With Us