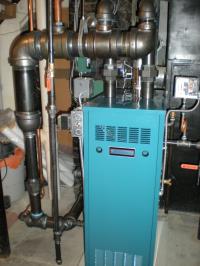 Anyways, these systems are still in service and perform very well. The technique never  caught on and was pretty much lost to the scrap heap of history. But Steve and me brought back the concept and I put in a steam mini tube system in my own house to replace the forced air unit that my wife and I hate so much.

I had plans on installing hot water heat in my house and had already piped the second floor for hot water so when I decided to go with a steam mini tube system I left the second floor hot water and utilize a steam to water heat exchanger fed by a mini tube to create the water zone. What I did was to arrange the water side to draw its water from a 40 gallon tank, (I’m using an electric water heater vessel with the electric hook up not installed). Every time the first floor (steam) thermostat calls for heat, it also turns on what I call the shuttle pump to shuttle water from the storage tank to the heat exchanger where the steam can heat it and then it of course returns to the storage tank.

The first floor I installed two runs of fin tube radiation, one in the kitchen and one in the living room, and I installed a standard wall convector unit in the master bedroom. All these are directly fed steam via mini tube (3/8th) O.D. tube. The return pipes on a mini tube system are ¼’’ O.D. tube.

The boiler is a Burnham steam boiler IN3 model. The boiler is piped normally with a very generous sized header.

I know that it sounds incredible that a steam system can be installed that uses such small tube but it can so long as certain things are considered. This system by the way defies just about every rule of steam ever made. I tell you this so that you don’t try to take anything away from this system and apply  it to the everyday systems out there. Remember that the rules for steam date way before the mini tube system was invented. 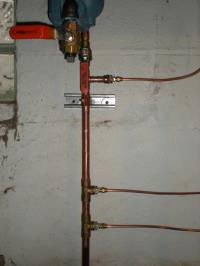 Steam mini tube is an all copper system. Yes that flies in the face of us steam throwbacks. Its copper because anything ferrous would rust and clog up the little tubes. So there is a cathode and anode  trade off that takes place with these systems. To my knowledge the mini tube system was the only steam system to be designed from the git go to use copper.

The system works better than I had hoped for. The main is heated to the end in 50 seconds and the radiators are hot all the way across in about 3 minutes from the time the steam left the header and entered the takeoff. Now that’s efficiency. As the system starts feeding steam to the mains it is operating at about 3 ounces of pressure. As soon as the F&T traps at the end of the main close, the pressure immediately jumps up to about a half pound. Its this half pound that drives the steam thru the mini tubes. Once all the traps close the system builds up one and a half pounds of pressure and justs sits there at that pressure. So I set the pressuretrol at 2 pounds. The steam returns to a condensate tank which is necessary on mini tube steam and is pumped back overhead so that eliminated the Hartford loop requirement.

I paid extra special care to anything that that would make noise. The fin tube doesn’t rest on the brackets but is hung with high tensile strength stainless wire so that it can move without making any noise, and the steam main’s hangars are installed on the outside of the insulation to prevent noise. Folks, the system is the quietest steam system I’ve ever run across.