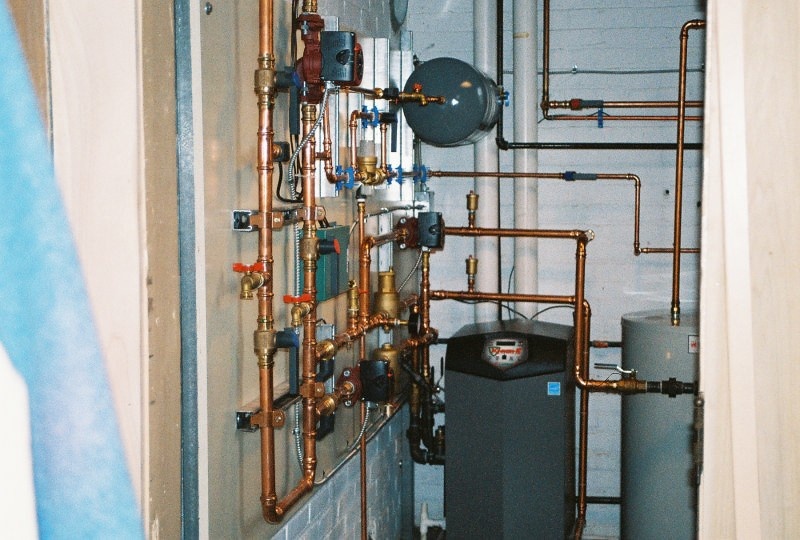 Lets first talk about the old cast iron boilers. My description of a boiler for years has been ''a cast iron pot with a fire under it''. That was pretty accurate too. There wasn't a whole lot more to it. Here is the thing. When it fired, (turned on), it was an all or nothing proposition. If your boiler was rated to burn 200,000 btu's of gas, thats what you burned. All the time. Even on a mild day outside that boiler was going to fire as if it was the coldest day of the year. Its like slamming the accelerator pedal of your car to the floor every time you start, and keeping it there. These boilers were also connected to chimneys that relied upon heat rising to make the chimneys draft. So there had to be heat going up the chimney. Of course you paid dollars to make that heat and a reasonable chunk of it just went up the chimney. There had to be quite a bit of heat going up the chimney otherwise the exhausting flue gases would condense and you'd have acid rain in the chimney. This would lead to a new chimney.

So in short, the old boilers would burn at full capacity and waste alot of that heat up the chimney. None of that was very efficient.

From Europe comes relief! Its been said the Europeans are thirty years ahead of us in heating technology. Sad, isn't it. Fuel is expensive in Europe. Thats powerful incentive for research and development. Until recently fuel wasn't that expensive here so we just reached a certain level of technology and stopped advancing. Well, fuel isn't cheap any longer! Now all were installing on hot water heating systems is a modulating condensing boiler.

It works like this. Lets start with the modulating part. The boiler measures the outgoing water temperature and the return water temperature and decides how much gas it needs to burn. Kind of like when your accelerating your car, you ''step on it'' to get up to 55mph but then back off to maintain it, and maybe jockey back and forth somewhere in between a bit. Same idea. The boiler monitors the supply water temperature, return water temperature, target temperature its trying to achieve, and automatically modulates the firing rate (the gas pedal). Neat, huh? The amount it can cut back on the gas is called turn down ratio. For example the Lochinvar Knight (pictured above) has a 5 to 1 turn down ratio.This means it can turn its gas input down to 1/5th the rated maximum input or 20%. Thats where the modulating or ''mod'' part of the name comes from.

Next is the condensing or ''con'' part of the name. These boilers purposely utilize as much heat in the transfer from fire to water as is possible. There is not enough heat left over to make a chimney work. They use plastic exhaust pipe going out the side of the house (usually), and a blower to force the exhausting of the boiler. With so little heat left in the exhaust condensation occurs. But thats okay, because these boilers were designed to do just that. The condensation is a kind of ''proof'' that the boiler is operating as efficiently as possible, squeezing all the heat out of the combustion process as it can.